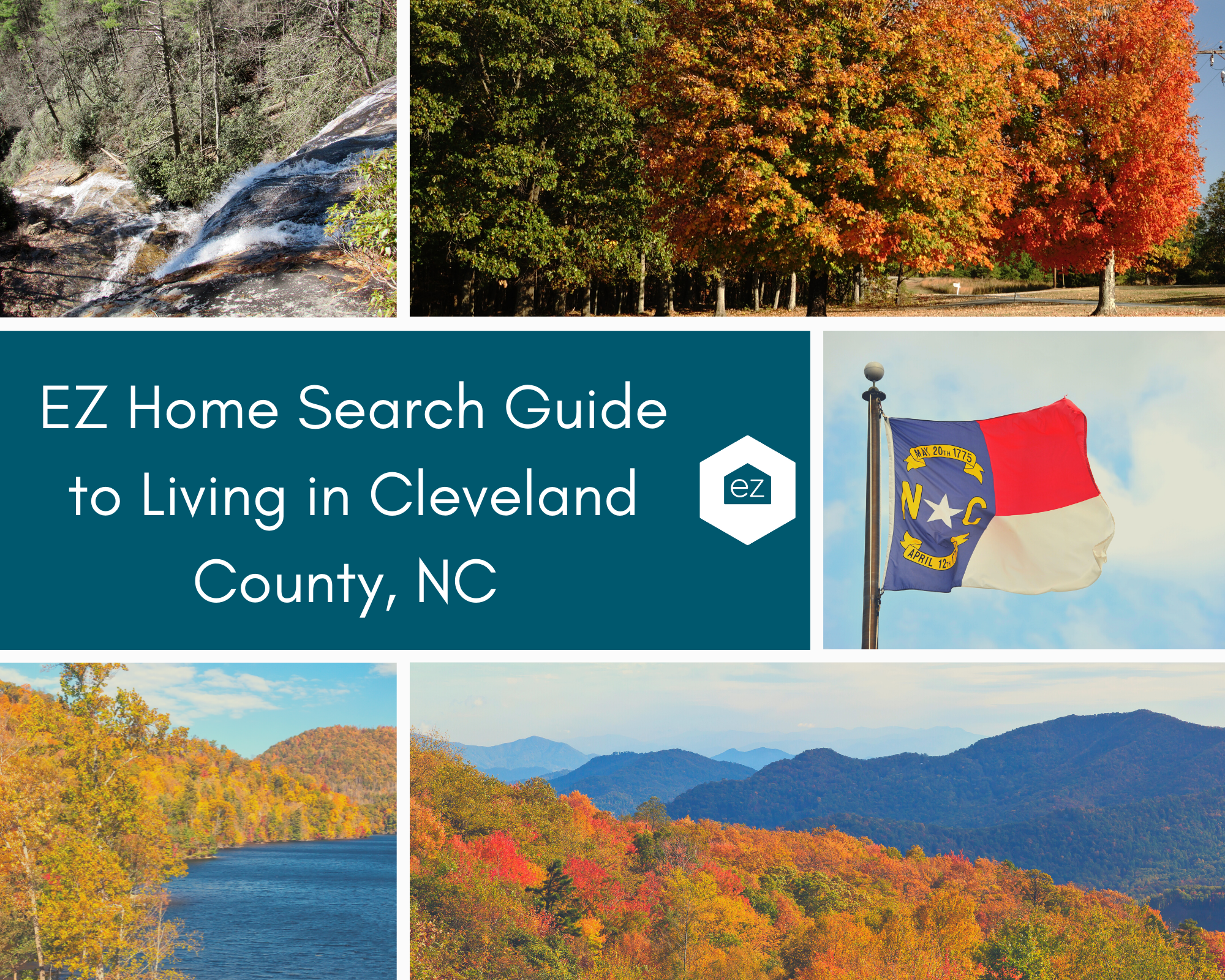 The county is an epicenter for music, with the foundations of Scruggs-style Bluegrass originating here. A Country Music Hall of Famer and songwriter, Don Gibson, hails from the county. The deep music tradition continues today with festivals, music venues, and museums.

Learn more about Cleveland County in our guide to living profile. See if the rolling hills and tranquil towns are the right place for you to call home.

Cleveland County lies in the Blue Ridge Mountain foothills between Charlotte, Asheville, and Greenville and Spartanburg. Residents have a great home base between the mountains and the beaches. Surrounding Cleveland County is Burke, Lincoln, Gaston, and Rutherford counties in North Carolina and York and Cherokee counties in South Carolina. Highway I-85 runs through Cleveland, making it easy to access the larger mountain metropolises and major cities in the state.

As a foothills county, you'll find lots of changing elevation. The rolling hills are cut by various rivers and creeks, with perhaps the most notable being the First Broad River, which meets the Broad River south of Boiling Springs. The largest body of water is the Kings Mountain Reservoir near Shelby.

Residents enjoy all four seasons, from the bursting colors of the spring wildflowers to the changing leaves in the fall. The county averages around 48 inches of rain a year, compared to a US average of 38 in. It only sees about four inches of snow each year. Summer highs top out around 89F degrees and the winter lows bottomed out at 28F degrees.

The modern borders of Cleveland County formed in 1841 from nearby Rutherford and Lincoln Counties. The name came from Colonel Benjamin Cleveland, a hero at the Battle of Kings Mountain during the Revolutionary War.

Early inhabitants included the Cherokee and Catawba native peoples. European settlement was initially a mixture of German, English, and Scots-Irish settlers. There were many conflicts between the native peoples and the European settlers that followed the Great Philadelphia Wagon Road into the region.

While Cleveland County did not see a lot of battle action during the American Civil War, many of its male citizens did serve in the Confederate forces. The area was also ransacked for resources by the Union forces in the spring of 1865. Post-war, the county seat of Shelby was occupied by the Federal forces overseeing the reconstruction efforts.

Cleveland County was primarily a rural county throughout its history, with agriculture being central to the economy. Manufacturers were primarily locally-oriented, such as flour and textile mills. Mining was also crucial to the local economy, as the area is rich in minerals like iron, graphite, quartz crystal, and beryl.

Cleveland County has 15 cities, towns, and municipalities inside its 469 square miles. The county seat is Shelby, nicknamed the "City Of Pleasant Living." Shelby's Uptown Central business district is a Nationally Registered Historic District and is home to many cultural attractions, local retailers, and dining videos. The city has the iconic southern look of wide sidewalks and ancient live oak trees.

Kings Mountain is a town that shares a border with Gaston County. Its name comes from the nearby historic Revolutionary War battle, which was fought five miles to the south. The town is in the foothills of the Blue Ridge Mountains.

Boiling Springs is a small town with lots of character and charm. Here you will find a university, beautiful homes, restaurants, and stores.

The town of Earl is another small-town village with roots dating back to the late 1700s. While the town itself is small, it is surrounded by woodlands, farms, neighborhoods, and open lands.

The county has a range of employment opportunities in healthcare, education, government, utilities, and manufacturing. You'll find the local economy is rather diverse without dependence on one particular industry.

Manufacturing is a significant industry in Cleveland County, employing over 40% of the workforce. There are numerous ISO 9000 certified companies here. Some top producers of materials are Clearwater Paper, Reliance Electric, Curtiss-Wright, and Greenheck Fan Corporation.

In August 2021, the unemployment rate for Cleveland County was a reported 4.9%, and North Carolina had a 4.4% rate.

Residents enjoy a range of housing options in Cleveland County. Find agricultural land to set up a family farm or a mountain ranch. Or live in a historic home in town as part of a close-knit community. Some townhome and condominium options are available in the larger cities like Shelby and Boiling Springs, but housing is predominantly single-family homes.

County data from September 2021 showed the number of new listings rose 11.1% year-over-year. Median sales prices increased 40%, bringing the median sales price to $225,000. The average days on the market until the sale was 15, a 61% decrease. Even with increasing new listings, the total inventory of homes for sale was down 3%. The month's supply of inventory stood at 1.3 months.

Looking historically at median sales price data, Cleveland County's prices were relatively stable over the last decade, slowly rising over time. The pace of price increases picked up a bit in mid-2020. The median prices first surpassed the $200,000 mark in mid-2021.

In terms of local property taxes, Cleveland County underwent its property re-evaluation in 2021. The revaluation could change tax bills as housing values increase over time. The county charged $0.6875 of $100 of assessed value in 2021. The municipalities and fire districts also charge property taxes, and their rates vary based on your address.

The 2020 US Census registered 99,519 people living in Cleveland County. The estimated population growth over the decade was 1.4%. The number of new residents increased by about 1,500 residents from the 2010 census.

Cleveland County trends towards a dispersed population, with 56% of residents living in a rural area. The median resident age was 42 in 2019. The 0-19 age group had the highest number of residents, followed by the 65 and over group. About 73% of residents identified as white alone and approximately 21% identified as Black or African American.

Gardner-Webb University is a local, four-year Christian liberal arts school with six colleges available to its over 4,000 enrolled students. It is located near Boiling Springs and emphasizes a student-centered experience. The college also has nine graduate study programs with master's and doctoral levels.

Ambassador Baptist College is a Christian university for those seeking academic preparation for going into full-time religious service. All four-year degree programs have a minimum of 60 hours of Bible and focus on religious studies.

Cleveland County Things To Do

Cleveland County is a place for the arts, history, and outdoor recreation. The small towns are the center of life here, hosting festivals that draw visitors and residents to their downtowns. For example, Shelby has the Shelby Zombie Crawl, the Mush, Music, and Mutts Festival, and Holiday Lights.

Every summer, the Joy Performance Center puts on Liberty Mountain, a performance that tells the story of the Kings Mountain Battle.

The Carolina Thread Trail extends through 15 counties, including Cleveland County and the first Broad River Trail. The trail is a connection of greenways, trails, and blueways spanning 300 miles. The Broad River Greenway has 1,500 acres available for hiking, picnicking, and exploring nature. A popular suspension bridge spans the First Broad River.

Straddling Cleveland County and Gaston County is Crowders Mountain State Park, which has multiple trails and stunning views from end to end. Rock climbing is also available in the park.

If you'd prefer your views from the water, try kayaking or canoeing down the First Broad River, which runs through the center of Cleveland County. More water recreation is available at Moss Lake, which covers 2,000 acres and 57 miles of shoreline. The lake is a popular place for fishing tournaments, as it is well stocked with bass and crappie.

In Shelby, you'll find several local attractions. Kids will enjoy riding the historic 1919 Carousel with 32 jumping hand-painted horses and an authentic Carousel band organ. Rides only cost $0.50, and it's open year-round. The 1952 miniature train runs around a large and impressive playground.

In the center of Uptown Shelby is the Earl Scruggs Center, which details the life of this famous Cleveland County musician. Learn all about the roots of southern American music and how Scruggs revolutionized bluegrass music.

The Country Hall of Fame inductee Don Gibson is from Shelby. He wrote 350 songs and 75 of those were chart-toppers. The Don Gibson Theater is a 400-seat venue named after the local star; it has hosted Grammy Award-winning acts.

Over in Kings Mountain, The Joy Theater first opened in 1949. Not only does it host a performance of Liberty Mountain, but it's also the center of an annual film festival. The venue hosts other local events and performances.

While in town, check out the Kings Mountain Historical Museum, which is in a historic post office and has exhibits about the city's history and other rotating topics.

The Broad River Greenway is a great place to ride, hike, or picnic. There are horseback trails and walking trails. Dogs are allowed but must be kept on a leash.

Experience the local flavors of the Blue Ridge Mountains. Cleveland County is home to a unique dish called livermush, seasoned and fried breakfast meat. It has a crispy outside and smooth, savory inside that pairs well with a plate of eggs or a biscuit. Besides this unique dish, you also find some world-class Carolina BBQ, more traditional southern food, award-winning restaurants, and farm-to-table dining. Here's what the Cleveland County restaurant scene has for local taste buds:

Uptown Shelby is a location for shopping that you can't miss. You'll find a collection of local retailers and small-town shops that sell everything from fashion to antique goods. Browse the local art galleries, which showcase a range of mediums and local products.

The Foothills Farmers Market are three weekly markets that feature products produced in Cleveland County. These markets sell produce from family-owned farms and small businesses of the region. The market operates on Tuesday, Wednesday, and Saturday in locations around Shelby.

The Antique Market of Shelby has four floors of antiques. Its owners have been collecting for over 40 years during their travels around the world.

Kings Mountain is another shopping destination with a lot of art galleries and unique shops. The Southern Arts Society rotates its collections every six to eight weeks.

For those who'd like a mountain lifestyle but with more connections to people and community, try Cleveland County. Residents benefit from Cleveland County's low cost of living and strong manufacturing economy. There are numerous small towns here with lots of retail and dining amenities. Towns like Kings Mountain and uptown Shelby are centers for culture in the area. In short, you'll find there is lots to do in Cleveland County. 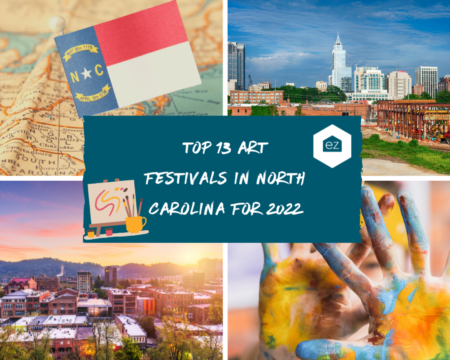 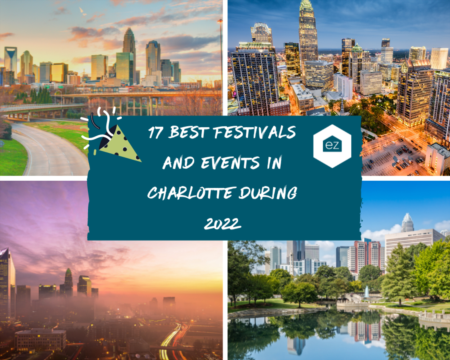 17 Best Festivals and Events in Charlotte During 2022

17 Festivals and Events In Charlotte During 2022 One of the best aspects of living in Charlotte is how this is something for everyone to do all year ...Read More 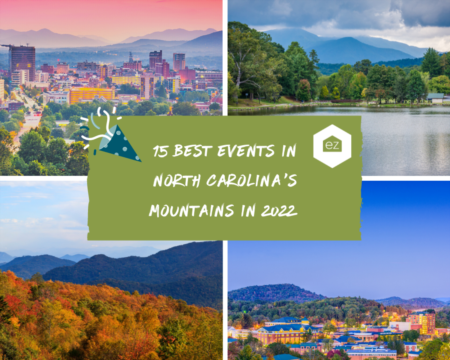 15 Best Events in North Carolina's Mountains in 2022 North Carolina residents have so many things to do. There's the beach, museums, state parks, ...Read More

17 Best Festivals and Events in Charlotte During 2022